Growth in Jobs and Revenue in Dutch Security Domain 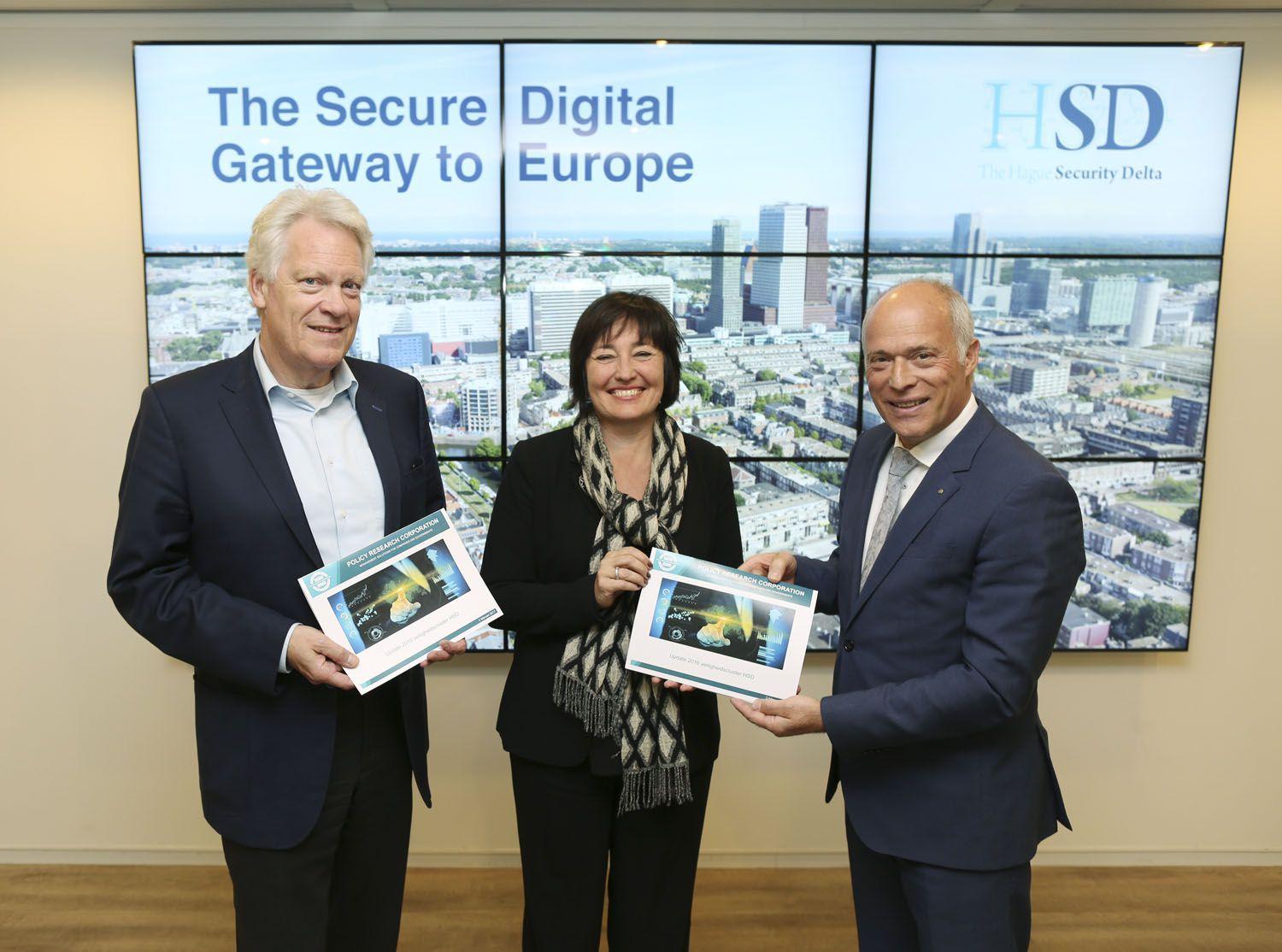 Last year, 1,000 new jobs were created in the security sector and the revenue increased with 4.8% up to a total sum of 7.2 billion euro. The added value of this sector to the national economy grew 6.2% up to a total sum of 3.8 billion euro. This was published in the Policy Research Corporation report on economic potential of the Dutch security domain. This is a growth which is higher than the national average of 2.1%. In order to maintain this growth it is vital to continue investing in this cluster. On 20 April, HSD executive director Richard Franken handed over the report to HSD chairman Wim Kuijken and Saskia Bruines, deputy mayor of the city of The Hague.

The Dutch security cluster HSD has important regional cores in Twente, Brabant and The Hague where the HSD Campus is located. The biggest growth will be realised within these cores. Richard Franken, executive director HSD Board: "This concerns both the growth of the existing businesses, which could expand through collaboration and innovation, and foreign security organisations which opened a branch in The Netherlands. It shows the attractive power of the presence of the cluster and the Campus. There is an ongoing trend in The Netherlands whereby more international security congresses are organised and foreign security organisations open an office in or near the Campus. This leads directly to an increase of jobs and revenue for The Netherlands. Not only in terms of security but also in service sectors, such as consultancies, taxis and hotels."

The region of The Hague

Figures show that the region of The Hague welcomed 31 new security organisations and 400 new jobs last year. The total of 406 organisations which are good for 15,200 jobs generate a revenue of 2.27 billion euro, including an added value of 1.23 billion euro to the Dutch economy. Saskia Bruines, Alderman Knowledge Economy, International, Youth and Education of the city of The Hague: "It is great to see that the HSD Campus gives this spin-off. The security domain creates many job opportunities for our region, in particular when all jobs at security services, such as the National Police and Fire Department, are included as well (13.200). This demonstrates why we are the international city of Peace, Justice and Security."

In 2016, 12 international organisations set up an office in The Netherlands/the province of South Holland, including Red Tullip Systems (USA/Denmark), Andrupos (Germany) and Payatu and E2labs (both from India). Results were also booked with regards to attracting international congresses with a total of 11. Examples are a congress about Smart Secure Cities, Critical Infrastructure Protection & Resilience Europe, hardware i.o. and European Conference on Blockchain. HSD Office works closely together with NFIA, InnovationQuarter and the Municipality of The Hague. Besides that, soft landing programmes with Canada and the USA were set up.

Joris den Bruinen, deputy director HSD: "In order to maintain this growth and efficiency, it is necessary to continue investing in this security cluster and to do so we will, for example, organise the second Cyber Security Week in The Hague at the end of September 2017. The Cyber Security Week will attract many international visitors, incoming trade missions and media to the city. It is a great example to see how such investments directly lead to economic return and gives The Netherlands the opportunity to demonstrate itself as the ‘secure digital gateway to Europe."

Read the article in FD (in Dutch)