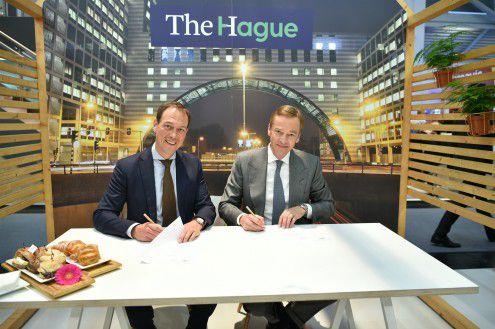 The Municipality of The Hague and MRP SoZa B.V. signed a letter of intent for renting 4,000 m2 at the former Ministry of Social Affairs and Employment (SZW) building near railway station Laan van Nieuw-Oost Indië in The Hague. The letter of intention was signed during the international real estate exhibition Expo Real in Munich. MRP SoZa B.V. is a collaboration of VORM Ontwikkeling and MRP Development and is currently preparing plans for the redevelopment of the building.

With this signature the municipality, represented by deputy mayor Boudewijn Revis (Downtown, Urban Development, Core areas and External), ratifies the intention for further facilitation of the spatial growth of the security cluster The Hague Security Delta (HSD). Earlier The Hague College recorded this ambition as firm in the Note Principles which is a determining factor for the development of the entire railway station area.

The HSD Campus Innovation Centre, located in the opposite Headquarter-building, is the focus of the security cluster in The Hague. Here, Knowledge-institutions, entrepreneurs and government organisations are working together closely on innovations. Since the start in February 2014 over 50 organisations have settled here. Among others, the National Police, The Fiscal Information and Investigation Service (FIOD), TNO, the Cyber Security Academy, University of Applied Sciences Leiden (UAS Leiden) and different entrepreneurs have an office at HSD Campus.

With the rent of 4,000 m2 in the former building of SZW, the municipality of The Hague wants to strengthen the ecosystem further by creating more possibilities for cybersecurity start-ups. It’s a temporary concept where cheaper, approachable office-space will be available for fast-growing impact start-ups in the security domain. These start-ups are very important for innovation in the area of security and growth of employment in The Hague.

The pilot project takes up to five years and is possible because the municipality and the owner work together on temporarily filling the building for the next five years. The former ministry fulfils an important role in the railway station area, which is part of the ‘Central Innovation District' that comprises the area between the three railway stations (CS, Holland Spoor and Laan van NOI) and the focus is on the Hague knowledge economy.

Photo: Boudewijn Revis (deputy mayor of the municipality of The Hague) and Bart Meijer (MRP Development)