Celebration of Multi-Year Japanese and Dutch Collaboration in Cybersecurity 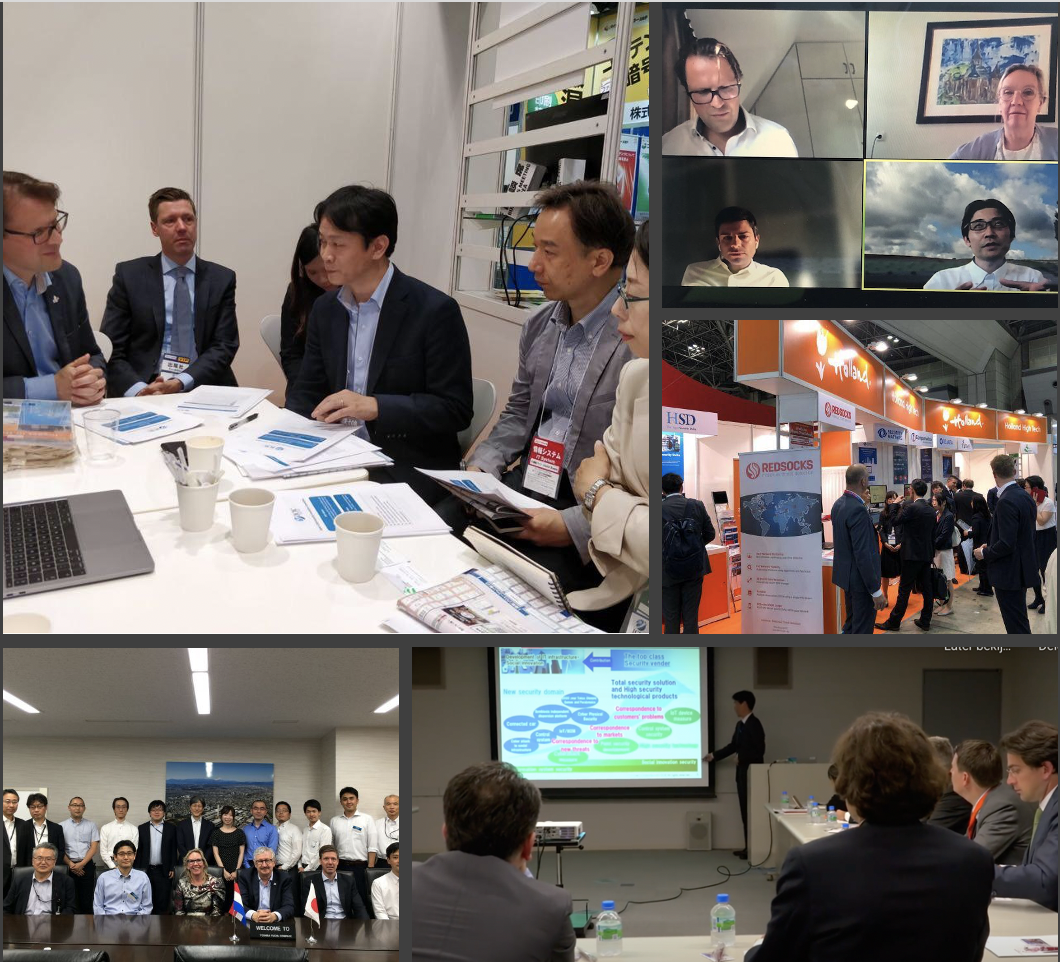 Japan is a high-tech society. The first high-speed train and the most modern robots come from this country. Also the Netherlands still has an edge when it comes to cybersecurity. Reason to join hands. The Olympic and Paralympic Games in Tokyo that started on July 23, 2021 formed a capstone on the first five years of that collaboration.

During a Knowledge Summit on Cybersecurity and Critical Infrastructure Protection at the end of July 2021, with participants from the Japanese and Dutch sides, we celebrated the past and looked to the future. According to the Japanese minister of digital transformation Hirai, the Netherlands is leading the way in the world. “The Netherlands is a leading country in digitalisation. It is consistently ranked high in various international surveys on digitalisation, including the United Nations e-Government Survey. In particular, it is also well known for its national effort to enhance cybersecurity, such as the collaboration between industry, government and academia through the Hague Security Delta.” Japan is therefore keen to collaborate with the Netherlands to improve the security of, among others,  'critical infrastructures'. State Secretary for Economic Affairs and Climate, Mona Keijzer, embraces this collaboration on behalf of the Netherlands. She stressed that cybersecurity is one of the conditions that must be met in order to digitalize our society. Combining forces allows us to create a bigger impact and it is important to work together with like-minded countries like Japan. The Netherlands looks forward to new possible collaborations between Japan and the Netherlands.

Five years ago, the collaboration between Japanese and Dutch companies, knowledge institutions and governments took the form of a 'Partners for International Business' (PIB) programme. The Netherlands Enterprise Agency (RVO) is the facilitator, with HSD as the coordinator of the consortium. As part of this programme, the parties involved discussed future collaboration opportunities during the Knowledge Summit on Cybersecurity and Critical Infrastructure Protection. The collaboration will continue in the following three areas. The first area is the energy sector. Forescout and Compumatica, for example, have been working together to secure parts of the energy grid of Japan's largest energy supplier TEPCO. These three parties aim to roll out the chosen approach to other Japanese and international energy suppliers. The second area is Fintech. In February 2021, Holland Fintech and Japan Fintech signed a memorandum stating their intent to collaborate. A kick-off meeting was organised during the Summit to put security on the agenda of the Japanese fintech sector. Experts from EclecticIQ, ReaQta, Holland Fintech and ABN AMRO, among others, shared their insights with Japanese financial industry representatives. The third area is 'smart industry'. More and more devices communicate with each other, and security is often not in order. The first contacts in this area were made during the digital economic mission to Japan in February. A round table session was organised in June 2021 to explore security as part of the smart industry agenda. During the recent summit, the parties involved indicated that they want to integrate cybersecurity into the smart industry sector and that they want to start an innovative field lab in Japan. Furthermore, knowledge exchange will take place for securing IoT devices and the supply chain of electronics manufacturers.

Plans for the future have been laid out during the summit. But not only that. It is also a celebration because the collaboration in the form of the Partners for International Business programme was completed after five years. The established relationships provide a mature basis for making successful new connections in the future. This marks the start of a new phase of Dutch Japanese relations in the field of cybersecurity.

It is a festive look back to a period in which a lot has happened. Various trade missions to Japan were organised and the Netherlands took part in the Japanese IT week with a Holland High-tech Pavilion. Important meetings took place there, that have contributed to the results in recent years. For example, Redsocks Security closed its first deal with the Japanese company Networld. TU Delft has conducted several studies with Japanese companies, universities and research institutions. For example, there have been studies focusing on disrupting ransomware via blockchain and securing IoT devices. Thanks in part to PIB Japan, Forescout now has several Japanese energy suppliers as customers. Part of TEPCO's energy network is being secured together with Compumatica and the intention is to roll out this approach further across Japan. In the context of the COVID 19 pandemic, Japanese and Dutch parties have consulted diligently to deal with new threats related to, for example, working from home and remote industrial control.

The Innovation Department of the Dutch embassy in Japan had already received Dutch cybersecurity delegations for a number of years before PIB Japan was launched. This interest motivated the embassy to contact HSD and proposed to start a PIB programme together with interested Dutch companies and knowledge institutions that would help them gain better access to the Japanese market. According to Eric van Kooij, Counsellor Innovation, Science and Technology at the Dutch embassy in Japan, working together in a consortium such as the PIB Japan programme is a win-win formula. “The PIB Japan program and the efforts of the Dutch embassy helped companies and knowledge institutions to enter the Japanese market more easily. They came into contact with good Japanese cooperation partners and major customers. The Olympic and Paralympic Games (Tokyo 2020) in particular proved to be an extremely good opportunity to develop business opportunities and make business agreements. Securing critical network infrastructures in Japan and stopping cyber-attacks turned out to be a great opportunity for the Dutch companies involved," said van Kooij.

Nort van Schayik, co-owner of Compumatica, has been participating in PIB Japan from the start, as he saw many opportunities in the Japanese market after a cybersecurity trade mission. “The PIB offered the possibility to collectively reach out and find partners and customers. We have found several partners with whom we are collaborating to carry out projects in Japan.” Forescout (formerly Security Matters) has also stepped in because of the many opportunities: “When we joined the PIB Japan Programme, SecurityMatters was a small startup with business in Europe and the US. For us, the PIB was the perfect vehicle to explore a new market, leveraging the great connections and network of the Dutch Embassy. The Programme exposed us to tens of potential partners and customers enabling us to showcase our technology and start local relationships.” Both companies achieve success in Japan. Van Schayik: “All parties within the PIB, but especially the Netherlands Embassy in Tokyo, have supported us where possible in finding business partners and maintaining relationships. Especially in these times when it is not possible to travel to Japan ourselves, the Netherlands embassy in Japan has taken an active role as an information point for both us and our partners. We expect to carry out a number of pilot projects in 2021 that can be used as use cases for the Japanese market.” Japan is now an important market for Forescout. A lot of Japan’s critical infrastructure is digitally secured by this company. “The winning factors of PIB were a strong network and a very packed and super well-organised agenda, which allowed us to maximize opportunities during our stay there. We met an amazing and very committed partner – Macnica Networks – who helped us establish local presence and kick off all the successes that followed in the past years.”

Also read the article about the Knowledge Summit on Cybersecurity and Critical Infrastructure Protection.