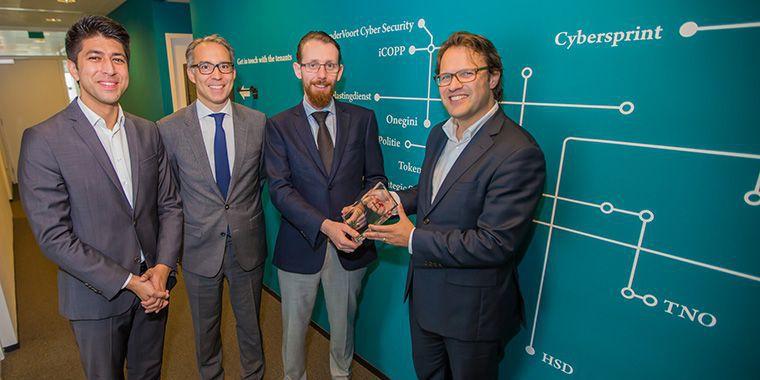 HSD campus welcomes the new office of cybersecurity startup Cybersprint which officially opened today in The Hague. The choice of Cybersprint for the HSD Campus in The Hague shows the it’s appeal as Europe’s largest security cluster. InnovationQuarter’s Chris van Voorden congratulated Pieter Jansen, Founder and CEO at Cyberspint, with the establishment of their company at the national innovation centre for security in The Hague and presented a special plaque as a warm welcome.

When you’re hacked, your reputation is at stake

Cybersprint developed the next-generation virus-scanner for the web, with real-time detection and warns companies about visible and invisible hacks on their websites. These hacks are often noticed by end-users first, causing indirect reputation damage. When hacks are exposed over a prolonged period (>7 hours), Google will find and index the malicious content, causing long-term reputation damage and possible de-listing of search results. “After having accompanied Prime Minister Mark Rutte during his Cybersecurity Economic Mission to Atlanta in 2015, a lot of national and international doors opened for our startup. For example we are now in close contact with the FBI and Homeland Security”, says Pieter Jansen, CEO of Cybersprint.

The Hague Security Delta (HSD), InnovationQuarter, and the City of The Hague supported Cybersprint in finding its way in the security network in The Netherlands during their setup in The Hague. The initial contact was established during an Economic Mission to Atlanta where Dutch Prime Minister Mark Rutte let a big delegation of companies.“Cybersprint is prosperous and a fast growing company, with a very promising and unique security solution”, states Chris van Voorden, Director Foreign Investments of InnovationQuarter. “Even though they just got started, their software is already known in the States, a great accomplishment. We are proud to be able to support them now that they’re established at the HSD Campus and introduce them to relevant contacts in the regional security business networks.”

Joris den Bruinen, deputy director The Hague Security Delta: “This makes Cybersprint a wonderful example of how - through cooperation - Dutch innovative startups can be marketed internationally and how we can create new jobs in The Netherlands."