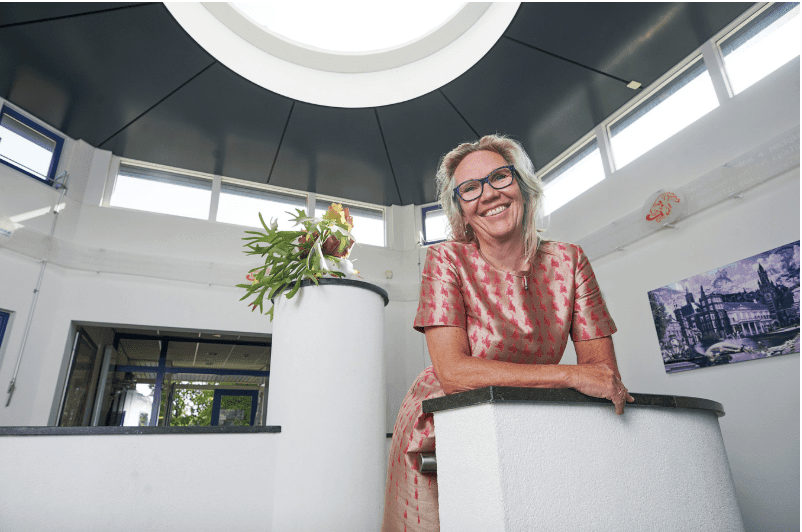 While searching for partners and new markets outside the Netherlands, Compumatica Secure Networks came into contact with HSD. As an HSD partner, this company is now a participant in the programme “Partners for International Business Japan: Cyber Security”. ‘It’s not as if new orders start flooding in after one trip.

Dutch companies and knowledge institutions are working together withina consortium in order to position the Netherlands as a country that can ensure the cyber safety of Japan’s vital infrastructure during the 2020 Olympic and Paralympic Games in Tokyo. The consortium emphasises the importance of pro- tecting the energy, drinking water, and telecom sectors. The digital security of financial services and autonomous vehicles is also an important topic. In 2016, within the framework of the Partners for International Business (PIB) programme, the consortium members sign a partnership agreement with the Netherlands Enterprise Agency (RVO).

‘The initiative for PIB Japan was born four years ago during a trade mission to Japan’, explains CEO Petra van Schayik. ‘The trip was so interesting that a number of companies decide to start a PIB together with the RVO. Co-participant Alliander writes a collective proposal. The RVO approves it, and in 2016 we end up signing the official partnership agreement, which is accepted by the RVO. As a result, we have an effective organisation in the Netherlands as well as in Japan that supports our PIB. That is of the utmost importance. HSD has an important coordinating role in this regard. You simply need a party that serves as a link between all the organisations and facilitates collaboration.’

"Doing Business in Japan is all about trust."

In May 2018, the Japan IT Week will take place. In connection with that event, PIB Japan will collaborate with a great many other parties to organise a mission to Japan. Participants include SecurityMatters, Compumatica, Redsocks Security, TU Delft, ReaQta, HSD and InnovationQuarter. ‘We will have the opportunity to present our cyber propositions at the Holland Pavilion, with the goal of enteringinto new relationships with Japanese companies, knowledge institutions, and government entities.’

During this mission, it becomes clear to Van Schayik how important the mutual collaboration between companies inside PIB Japan, the presence of HSD, and the role of the Dutch embassy in Tokyo all are. ‘Together, we represent the Netherlands. That creates a feeling of confidence and trust abroad. As a small company on your own, you can’t hope to accomplish this. As an individual actor, you simply won’t get the exposure and attention that you can get via the Holland Pavilion now. A national pavilion really has a much greater impact.’

Van Schayik is glad to give an example of how important trust is when it comes to winning a potential order. ‘During the mission, we had the opportunity to demonstrate and test our product for a major potential client. The Dutch embassy was present during the demonstration. In a country like Japan, that is of crucial importance. It’s clear to them that we are not just some single company, but that we have the support of the Dutch government. That can make or break the deal; trust is the key ingredient for doing business in Japan.’

"Don’t think that new orders will start flooding in after one trip."

Participating in the PIB requires a commitment in terms of time.

When asked what things companies with international ambitions should take into account, Van Schayik has a clear and simple answer: ‘Don’t be in a rush. Dutch entrepreneurs often want to achieve results very quickly, but in other cultures, especially when it involves cybersecurity, doing business demands a great deal of time. One of the reasons is that you need to build trust. Organisations that wish to start a PIB or to participate in such a programme should realise that it requires a great deal of time and investments, without any guarantee that the goals set out beforehand will actually be realised. ‘So, don’t think that new orders will start flooding in after one trip.’

Read the article in Dutch.