H.E. Shefali Razdan Duggal, U.S. Ambassador to the Netherlands, visited the HSD Campus today for a special networking event. The Embassy of the United States in the Netherlands, the Dutch Ministry of Foreign Affairs, and Security Delta (HSD) hosted a U.S. delegation of women leaders in cybersecurity. The participants came from a wide variety of backgrounds, representing renowned government organisations, private sector powerhouses, and impressive academic institutions from the United States.

The programme kicked off with a working industry roundtable moderated by Joris den Bruinen. Participants included part of the US delegation and some Dutch speakers, including FERM, TNO, Capgemini and dcypher. Discussions took place on opportunities and challenges within the industry, and the value of public-private collaborations, as well as new capabilities to address new threats.

At the networking reception the U.S. Ambassador to the Netherlands gave a short address to the participants, following a welcome by HSD Director Joris den Bruinen. The ambassador emphasized the strong ties between the Netherlands and the United States of America, and the importance of cybersecurity in our digitising world. 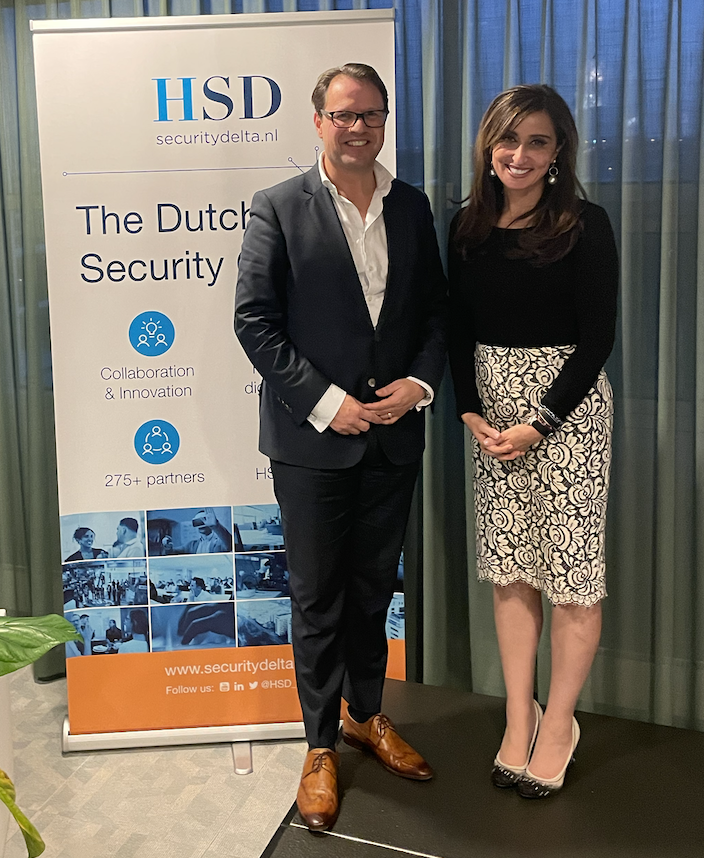 This networking event was an opportunity for the Dutch cybersecurity ecosystem to meet informally with the U.S. visitors as part of a custom-made programme put together by the Consulate in the United States. It was meant to encourage informal knowledge sharing, and to maintain the already strong connection between the United States and the Netherlands.

RVO, the Netherlands Ministry of Foreign Affairs, HSD and Innovation Quarter are running a multiyear cybersecurity roadmap for the United States. This roadmap -developed in 2020 after the RSA Conference- aims to collectively guide Dutch cybersecurity projects, initiatives and companies getting access to the US market. And in addition increase the overall stakeholder network in the US that commit to the Netherlands as cybersecurity gateway to Europe and strengthening knowledge exchange between the US and NL.