Launch of Global Commission on the Stability of CyberSpace 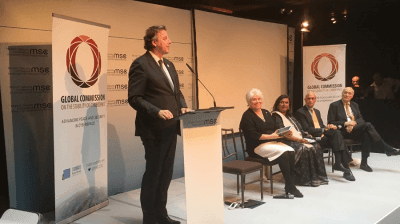 First commission of its kind dedicated to developing norms and policies to improve cyberspace stability and security.

The Kingdom of the Netherlands, together with The Hague Centre for Strategic Studies (HCSS) and the EastWest Institute (EWI) recently announced the establishment of the Global Commission on the Stability of Cyberspace (GCSC): a global body formed to convene key global stakeholders to develop proposals for norms and policy initiatives to improve the stability and security of cyberspace. Principal supporters of this initiative include the Internet Society (ISOC) and Microsoft. In 2016 during the Munich Security Conference (MSC) The Netherlands Minister of Foreign Affairs Bert Koenders already announced the intention of his government to support the establishment of a GCSC.

The GCSC, based in The Hague, will be chaired by Marina Kaljurand, former Foreign Minister of Estonia, and will be comprised of over two dozen prominent independent commissioners, from over 15 countries, with the expertise and legitimacy to speak on different aspects of cyberspace. The Commission will develop proposals for norms and policies to enhance the stability of cyberspace.

“Cyberspace is becoming increasingly exploited. It requires greater coordination among us all. It needs the development of norms to provide a stable and secure environment. So we can all benefit,” said Bert Koenders, Dutch Minister of Foreign Affairs of the Kingdom of the Netherlands. “This is a unique initiative to ensure that we drive activities in the right direction. We are on the threshold of a new era. It’s time to safeguard our cyberspace.”

“As cyberspace continues to rapidly evolve, it offers distinct advantages to our way of life while also posing specific threats,” added Marina Kaljurand, GCSC Chair. “It is for this reason that this body was devised as a means to ensure the exchange of knowledge and ideas between governments, the business community, academia and concerned citizens. Each is affected by, and has a contributing role to play, in shaping cyberspace.”

The GCSC will convene over a three-year period to formulate policy recommendations for action—applicable to both government and the private sector led initiatives. Detailed recommendations will be published and advocated in capitals, corporate headquarters and with the general public worldwide.

“In our globally connected society, cybersecurity norms are essential to preserving a predictable, stable and secure cyberspace. The IT industry has a critical role to play to contribute to the development of effective norms and provide the technical expertise necessary to assist in their implementation,” added Scott Charney, Corporate Vice President, Trustworthy Computing, Microsoft. “As a company, we’ve been actively engaged in the norms debate for years and support this initiative as a very important contribution to reducing risk in cyberspace and protecting global trust in technology.”