Preventing the New Generation of Hackers with HackShield 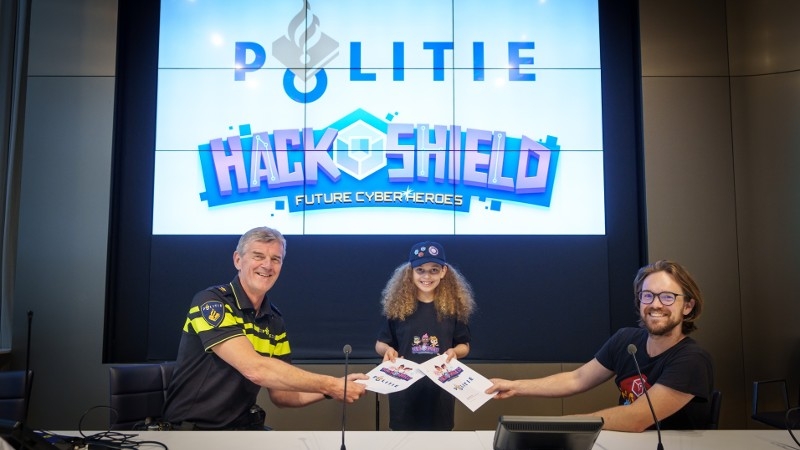 Young children are online almost all day long, yet we often don't know what they are up to. They are digitally skilled, but not digitally resilient. That is why the Dutch Police are increasingly focusing on preventing children from making mistakes online. HackShield's cybersecurity game is intended to help them do this. On 14 July the collaboration was signed.

Children between 8 and 12 can sign up as 'junior cyber agents' in the online game of HackShield. They make puzzles, answer questions, go on missions and have to score 'shields'. In this way, they progress to a higher level. The aim is to make them more resilient to hackers and to give them the knowledge to also protect people around them. Because grandparents are often less digitally competent than their grandchildren.

"We also want to prevent children from going down the criminal cyberpath themselves", says Floor Jansen of Team High Tech Crime. "Children have no idea what the consequences are of their online behaviour. If you smash a window, you see broken glass afterwards. The damage is visible. But if a twelve-year-old performs a DDoS attack, he won't see the damage. The police carry out surveillance on the streets, but online this is difficult. We want to change that. Because the internet is a kind of a Wild West for children; unregulated. You don't know who can be trusted and there are hardly any sheriffs around. This allows them to go down the cyberpath without realising it themselves."

The collaboration with HackShield is part of a broader strategy to enhance the digital skills of the youth. The Framed, Gamechangers and ‘Een klik verwijderd van cybercrime’ campaigns are other recent initiatives with which the police are trying to prevent a new generation of hackers. Floor Jansen: "A game like this allows young people to make mistakes safely, without being taken to the police station straight away. And making mistakes teaches you the most."

Tim Murck, founder of HackShield. "It's wonderful to see how valuable the recognition from the police is for the more than 55,000 junior cyber agents. The fact that this recognition has now been laid down in a collaboration statement contributes to a sustainable expansion of the HackShield community and a continuous flow of highly relevant cyber content."

The other signatory, Theo van der Plas, Programme Director Digitalisation and Cybercrime adds: 'Our broad cybercrime approach focuses on preventing victims of online crime and disrupting the criminal process. At the same time, we as a police force also have an eye for potential (often young) perpetrators. We want to protect young people who experiment online out of boredom from making that mistake. They do not realise that, for example, trying to guess or crack someone else's password or searching for vulnerabilities on a website without permission is often punishable. They are often one click away from committing a cybercrime. We try to prevent this by pointing out alternatives. The collaboration with Hackshield helps us to reach a whole new generation of primary school pupils and to make them cyber-aware.'