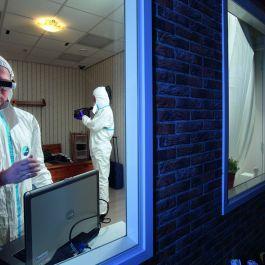 The NFI put a revolutionary CSI Lab into use in 2011. It is a demonstration and training facility to investigate a virtual crime scene. Forensic investigators first record the actual crime scene with 3D scans, exactly as the police encountered the situation. All the data can be re-examined virtually in the CSI lab. This makes it possible to test new hypotheses on the facts even years later.

CSI Lab The Hague uses existing techniques from fields such as aviation, medical science and the game industry. In collaboration with the Amsterdam Medical Center (AMC), a camera is being  developed to track minute blood and heat traces and establish their age. Forensic investigators in the lab also receive training in collecting traces by using serious gaming.

NFI is the project manager and collaborates with Philips, Thales, AMC, TNO, Cap Gemini, Delft University of Technology and The Hague University of Applied Sciences, among others.