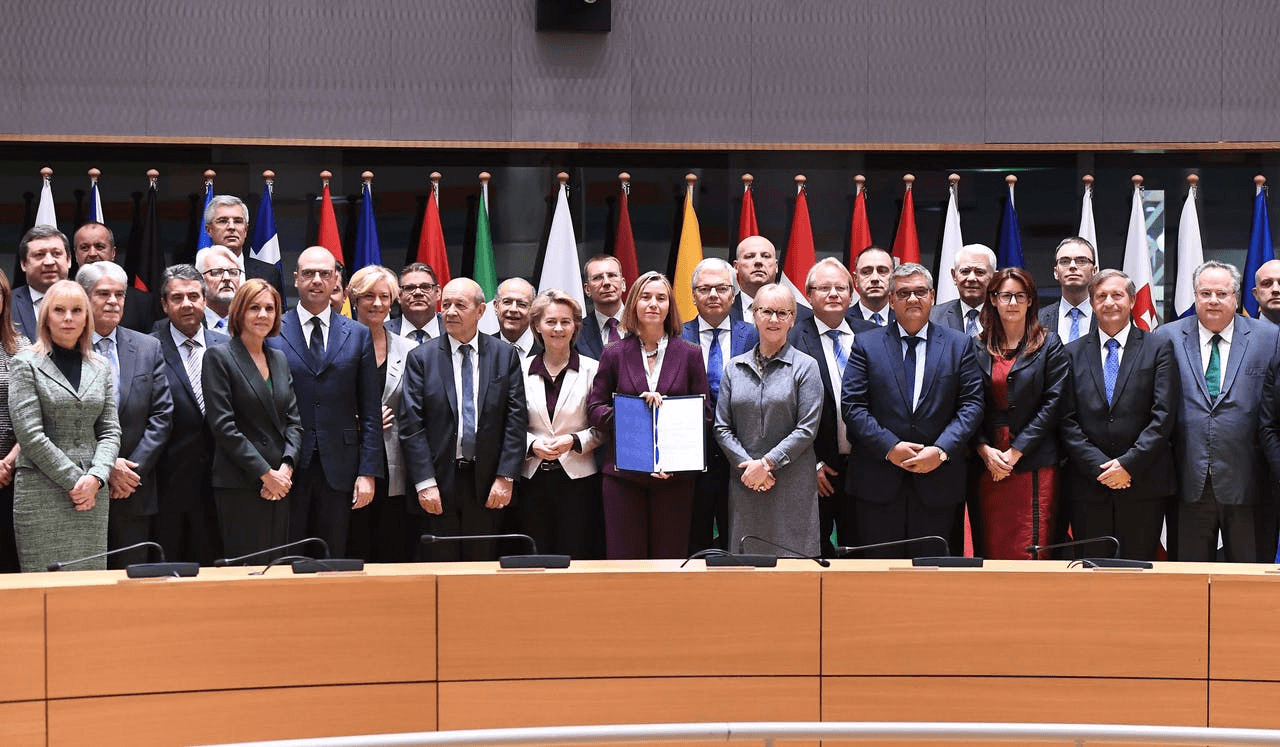 More than 20 European states, among them The Netherlands, signed today a landmark pact that aims to boost cooperation on defence level after Brexit and counteract Russian pressure. EU-ministers of Defence and Foreign Affairs signed a notice of intent in Brussels pledging that countries will provide "substantial support" in areas including personnel, equipment, training and infrastructure" for EU military missions. It also commits countries to "regularly increasing defence budgets in real terms" as well as devoting 20 percent of defence spending to procurement and two percent on research and technology.

,,A historical day for European defence’’, says Federica Mogherini  (High Representative of the European Union for Foreign Affairs and Security Policy/ Vice-President of the Commission) prior to the meeting.

Aim of the Permanent Structured Cooperation on Defence Agreement (PESCO), seeks to tighten defence between EU members and improve coordination in the development of new military hardware. It should take care of a more efficient spending of defence money. The agreement is part of efforts led by Germany and France to reboot the European Union after Britain's decision to leave and follows the announcement in June of a 5.5-billion euro European Defense Fund.

Europe shows its fist
Minister Halbe Zijlstra (Foreign Affairs) pointed out that The Netherlands already works closely together with Belgium and Germany. ,,That entire Europe now doing this is a breakthrough. Europe shows its fist to the whole world, both to allies as well to countries which are less friendly: Don’t play with us!’'

A major and strong defence is necessary because of Russia, the ,,very troubled’’ Mid-East and the major migration movements in Africa, says Zijlstra. ,,We see that the world at this moment is not a cosy place. A world in which we need to be aware and defend our interests.'' Zijlstra speaks of a merger of interests of the NATO and Europe. ,,We must spend our money more efficient and increase the power of the NATO.''

Every PESCO-project is under management of the member states contributing to this. It’s not about a European army. The Netherlands plays a leading role in the PESCO-project that should take care of smooth border crossing of military transport without comprehensive controls is guaranteed if threats occur in Europe.

PESCO could lead to the creation of a European military hospital or logistics hub, but will first focus on projects to develop new military equipment such as tanks or drones with the aim of harmonising weapons systems and eliminating gaps in capabilities. France, Germany, Spain and Italy are among the nations signing up.