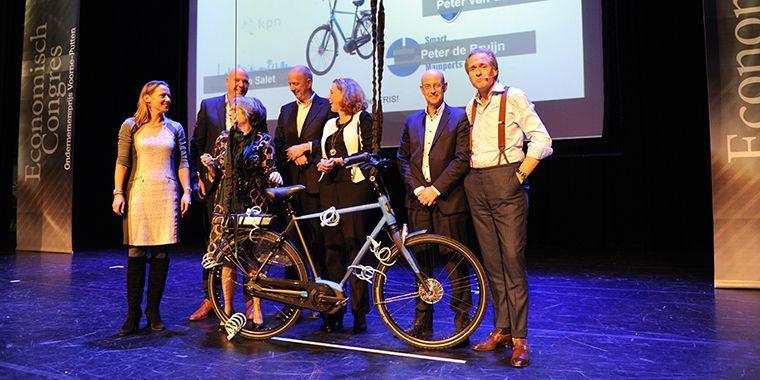 How to recover stolen goods? Fieldblab SSRMainports presented a new service in collaboration with security company BHD, insurer a.s.r, bicycle manufacturer Sparta and cooperating municipalities on December 12th. The new service, called FRIS (Find, Recover & Insure Service) starts with 10.000 e-bikes which will enter the market with a permanent internet connection through which stolen bikes can be localised. Special investigators will trace the e-bikes and return them to the rightful owner. During the Economic Board congres in Voorne-Putten the partners involved symbolically started their agreement by locking the e-bike.

How does it work?

The e-bikes will enter the market with a GPS module. Insurer a.s.r currently develops an insurance concept for consumer goods like the e-bike which are connected to the FRIS service. Security organisation BHD Nederland develops a control room for the FRIS e-bike service which will, 24/7, focus on tracing stolen e-bikes. FRIS will establish itself in the SSRMMainport fieldlab in Nissewaard. The service start with a trial period at the beginning of 2017. When the trial period proves to be succesful it will create hundreds of extra jobs for special investigation professionals.

Fieldlab Smart, Safe & Resilient Mainports
FRIS is the first project initiated by Fieldlab SSRMainport which has entered the realisation stage. In April of 2016 initiators InnovationQuarter, The Hague Security Delta and the Metropoolregio Rotterdam Den Haag (MRDH) started this fieldlab which offers collaboration between the municipality of Nissewaard, and the physical presence on  the island of Voorne-Putten, where innovations will be developed, tested and eventually go through an (inter)national launch and positioning into the markets.