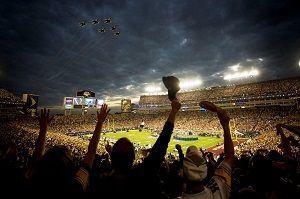 Allied Telesis, Premium Partner of HSD, has been involved in a successful public-private partnership in the US. The initiative was recognised by the White House’s Smart Cities Initiative for their role in solving security and transportation challenges for the Super Bowl 2016, which takes place in San Francisco 49ers stadium.

The “Smart Cities” Initiative will leverage more than 25 new technology collaborations to help local communities tackle key challenges  such as reducing fighting crime and managing the  effects of a changing climate.

The San Francisco 49ers, Santa Clara Valley Transportation Authority (VTA), City of Santa Clara, Arini Geographic’s and Allied Telesis have teamed up to create a smarter, safer Levi’s® Stadium and a smarter, safer public transit system in advance of the Super Bowl 2016, one of the largest sport events in the world.

This coalition for public safety innovation has deployed state of the art sensors to analyse patterns and display predictive outcomes. The first-of-its-kind technology has been deployed at strategic locations throughout Santa Clara and beyond. With the “Internet of Things” connecting people and devices, Levi’s® Stadium has become a model for how a public-private partnership can analyse, visualise, and communicate in real-time with stakeholders in the public safety community.