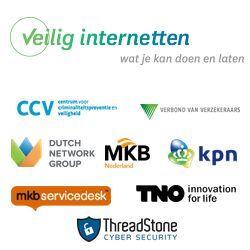 The Royal Association MKB-Nederland, in cooperation with the Ministry of Security and Justice and several other organisations, including HSD partners KPN, TNO, ThreadStone, and ‘Centrum voor Criminaliteitspreventie en Veiligheid’ has launched a campaign to increase cyber security for entrepreneurs. The campaign is aimed at preventing cybercrime, which costs the Dutch economy around 8.8 billion euro annually.

"SME entrepreneurs realise too little that their business can be an interesting target," says director Leendert-Jan Visser of MKB-Nederland. “Or they just don’t know how they can best weapon themselves, and what precisely against. This while it often involves relatively simple measures. With this campaign, a unique partnership of businesses, government, and knowledge institutions, we want to specifically support entrepreneurs.” Visser also refers to the obligation to report data leaks, which comes into force on the 1st of January 2016. "That is also a good reason to take data security under a microscope. If your company is not well protected against loos, theft or abuse of personal data, in severe cases this can lead to an administrative penalty.”

As part of the campaign, SMEs can subscribe for a controlled hack of their digital work environment. The participants will first be asked to fill out a form developed by TNO to get a better understanding of their current security environment. An ethical hacker of ThreadStone will then attack their systems, using the ThreadScan platform to map vulnerabilities. The results will then be discussed with the participants.

ThreadScan is an initiative of ThreadStone, TNO and WorldStream and is developed with co-funding from the HSD Development Fund from the City of The Hague.