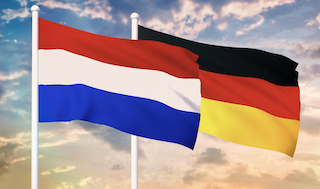 In 2022, InnovationQuarter, Security Delta (HSD) and multiple companies including HSD partners, will propose a Partners for International Business (PIB) programme for Germany. The goal is to realise business ambitions in the German cybersecurity sector. This proposal comes after a successful cybersecurity trade mission to Germany last October, and the identified opportunities to do business with our eastern neighbour. Besides the opportunities a PIB offers to grow internationally, it also creates strong ties between participating organisations.

The PIB-programme is an instrument offered by The Netherlands Enterprise Agency (RVO) on behalf of the Dutch government. The programme helps companies to collectively enter a foreign market through funding but also by using its foreign network of embassies, consulates and businesses. Furthermore, it designs a two to three-year action plan with activities to create a better positioning and access to promising international markets. The German cybersecurity sector is such a market. The German government invests large amounts of money in the cybersecurity sector to modernise its digital infrastructure and to fight cybercrime. Besides the opportunities in the German cybersecurity market, Germany in general remains the strongest economic partner of the Netherlands. It is the country’s most important trading partner and the largest economy in Europe. In 2019, the Netherlands exported for 98,7 billion euros to Germany. Despite the consequences of COVID-19, the German economy grew by 4% in 2021.

In addition, the cybersecurity trade mission to southern-Germany last October can be seen as an important steppingstone to the PIB proposal. The mission also strengthens the collaboration between the two countries. During this mission, led by InnovationQuarter, RVO and HSD, twelve companies explored business opportunities. They met with the Dutch consulate in Munich, German knowledge institutions and businesses, and visited the it-sa fair in Nürnberg. The involved companies were able to make strong connections with German parties. In addition, companies also used this opportunity to network with each other, resulting in several cross-border collaborations. For example, HSD partner Guardian360 and Dutch-Belgian cybersecurity company Secutec, are currently looking into ways to collaborate.

Jan Martijn Broekhof, CEO of Guardian360: ‘’During the trade mission to Munich and Nürnberg, I got in touch with potential business partners and I grew my local network substantially. The latter was possible as participating companies introduced themselves among each other and tried to seek opportunities to cooperate. The local representation of the Netherlands in Munich made it possible for me to join a panel discussion during the town hall meeting at the IT-SA cybersecurity conference, resulting in a successful positioning of Guardian360.’’

Currently, twelve parties are enthusiastic and interested in joining the planned PIB-programme, including six parties who joined the trade mission in October. The plan will take concrete forms during the next months and, if approved,  is due to be signed in the beginning of 2022.