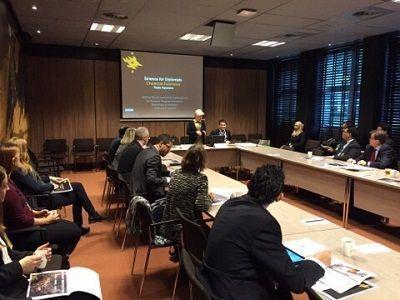 In the week of 30 November the Organisation for the Prohibition of Chemical Weapons (OPCW) held their twentieth session of the Conference of States Parties to the Chemical Weapons Convention. Together with OPCW and the United Nations Interregional Crime and Justice Research Institute (UNICRI), HSD organised a side event about Emerging Technologies, specifically focusing on Autonomous Systems and Artificial Intelligence.

As technological capabilities advance, artificially intelligent robotics and autonomous systems are increasingly growing in importance for our everyday lives. While the opportunities presented by these technologies for the advancement of society are significant, they also represent a challenge to our existing legal and ethical frameworks and, in particular, to security, not least through the connectivity, and thus dependencies, that they create.

The side-event to the Conference of States Parties of the Chemical Weapons Convention was visited by around 80 interested delegates of the State Conference and consisted of a series presentations by experts from a range of backgrounds. The session was opened and moderated by Ida Haisma, Director of HSD. After an introduction by Hamid Ali Rao, the Deputy Director-General of OPCW, and Cindy Smith, the director of UNICRI, the event focused on introducing the audience to current developments in artificial intelligence and autonomous systems and providing an overview of capabilities.

Emerging Technologies
Jonathan Forman, OPCW Science Policy Adviser, showed in his presentation that scientific developments are growing strongly. Demonstrated by a multitude of examples he showed that developed technologies go around the world quickly and that we need to prepare for the future. Carl Mayers from DSTL went on to talk about the development of smaller drones. Big steps are being made in the fields of autonomy and collaborative systems. Irakli Beridze, Seniot Policy and Stratgey Advisor at Unicri, showed that the usage of military robotic systems has increased enormously in little over a decade. That is why the UN is setting up initiatives on robotics and artificial intelligence. UNICRI enhances the awareness of current technological capabilities and works on a centre of expertise on artificial intelligence.

Niel Bowerman from the Future of Humanity Institute of Oxford University, addressed risk, opportunities and the ethical side of achieving human level artificial intelligence. There is much debate on how far into the future this will be achieved but the control problem needs to be solved before the capability problem. Hans Henseler, CEO of HSD Partner Tracks Inspector gave a private industry perspective on developments. He talked about the Sweety 2.0 project, which is state-of-the-art on artificial intelligence chatbots. Hans then went on to talk about the internet as the fifth domain and battlespace. What if autonomous viruses not only affect computers but also humans?

The session was concluded by a talk of Norbert Stellaard from Blik van Boven. Norbert is an experienced and certificed drone pilot. He talked about the disruptive effects and capabilities of drones. He addressed both the positive side of autonomous flying systems, for example the possibilities of quick collection of data that illustrate how detection and inspection can change with this new technology and the potential risks, what could terrorist do with a drone. UAV technologies also is an important topic within HSD. More information can be found in the HSD Dossier Drones.