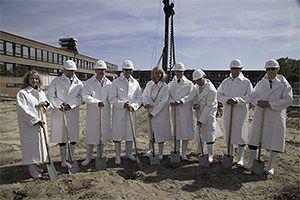 The Mayor of The Hague, Ms Pauline Krikke, NCI Agency General Manager Koen Gijsbers, and senior Dutch officials took part in a groundbreaking ceremony on May 30 2017 to mark the beginning of a major expansion of the NCI Agency’s location in The Hague.

The project will see a significantly upgraded building, as well as an expansion of the space to accommodate additional NATO technical staff. The works are paid for by the Dutch Government and will be executed in several phases, over a period of three years.

The expansion of NATO’s technical footprint in The Hague is part of a broader effort to streamline NATO’s IT by co-locating staff working on similar functions.

“History is coming full circle; NATO came to The Hague in 1955 to establish what was called the SHAPE Air Defence Technical Centre,” said NCI Agency General Manager Koen Gijsbers at the ceremony, “Now we are bringing teams working on the technical aspects of Air Command and Control from across the Alliance here in The Hague, significantly expanding the technical work that will be done here.”

The NCI Agency, NATO’s tech and cyber arm, is supporting NATO missions and operations at over 30 locations, but its technical work is concentrated in two locations: Mons, Belgium, which focuses on operating and defending the Alliance’s networks, and The Hague where advanced software is developed and maintained, and where NATO’s cyber innovation team is located.