EEN is a Continuing Success: Interview with Aratos Systems 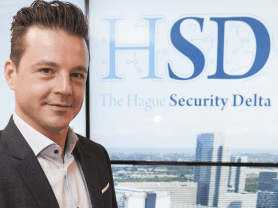 The Dutch datacollection / Cyber Security company Aratos Systems collects, processes and distributes data. The data is primarily drawn from satellites, but also from drones and ground sensors. The company processes this data and develops its own software and algorithms, support by AI (Artificial Intelligence) and blockchain technology aimed at multiple sectors, including Defence. Enterprise Europe Network (EEN) is often presented publicly with its successes in the search for consumers.

Peter van Dam (1977), together with his Greek partner Nikos Bogonikolos, owner and director of Aratos Systems, is enthusiastic about the matchmaking qualities of EEN and especially of consultant Herman Hartgers. “As Aratos Systems, we are continuously involved in European and national projects, including the so-called Pass Bord. This is a European consortium of multiple partners, including ours as a relatively small company. Pass Bord keeps itself involved with border control and border monitoring. For this project, which had failed to create traction in Brussels, we sought an end user in the Netherlands. Herman laid the initial contact with the Royal Marechaussee (the Dutch gendarmerie force) and ensured that they were committed to this proposition. It was a complete success in terms of matchmaking”, says Van Dam. “I can just call Herman. He makes excellent use of his own network and I receive replies from him rapidly. This is of great added value to us.”

That the project did not make it in Brussels, is a pity. “But this happens often. There are many, so-called ‘proposals’ that are made but only a very small percentage manages to become fulfilled. We, as Aratos Systems, operate continuously with four or five proposals at a time. This is great for a small company.”

Aside from collecting, editing and distributing of data collections, Aratos Systems is also active in research & development (R&D). “Yes, we are in the end of course a commercial company. Here as well, are the strengths and qualities of the EEN-network and Herman’s network invaluable. Seven months ago, we were able to sign a partner agreement with a company from Singapore. This company is active in the counter drone market. They have developed a technology that makes it possible to hijack the control of a drone and eliminate it outright. You can imagine that the threat of flying drones is huge. In the Middle-East alone there are examples of terrorist attacks taking place with the use of drones. You want to minimize the threat. We were in search of a partner in the drone market and Herman has, via EEN, made contact. In cooperation with this company, we are going to be looking at how we can sell their technology on the market in Europe and how to develop this technology further. This is where our R&D plays a role on top of our expertise in the development of algorithms”, says Van Dam.

Aratos Systems started three years ago as start-up. The young company was furthermore Network Partner at The Hague Security Delta (HSD), where they made use of SME Connect, a team that Herman Hartgers is also involved with. Van Dam has himself studied International Business & Trade and has a background in marketing. His Greek business partner, with who he has known for a long time, has a background in technical engineering. “We started this company together to, with our self-developed methods, entrench ourselves in Northwest Europe. This is the reason why we have founded the company in the Netherlands. In Greece, today, there are now twenty employees.” The company is currently occupied with the development of a HAPS (High Altitude Pseudo Satellite). “Satellites are very expensive and the use of drones is heavily regulated by law. At a height of 20 to 30 kilometers, the stratosphere, you are allowed to fly. Through this HAPS, we collect a great amount of data and it is a much cheaper method than satellites. The prototype is currently under construction. Near the end of 2019 there will be a first test flight. Application of this are primarily in precise agriculture but also in maritime matters or in the field of drugcrime.”

Slowly but surely it dawns to people, according to Van Dag, that the true innovations originate with SMEs (Small and Medium-sized Enterprises). “If you want to partake in the great European projects such as Pass Bord, then you invest a lot of time and manpower. SMEs don’t often have the capacity, which is why these kinds of projects often land with large corporations and conglomerates. Via a party such as EEN are SMEs able to become a part of these projects. The matchmaking of EEN is thus vital and you need people like Herman who actively act on it.”

You can read the original article in Dutch by clicking here.